The Moenkopi Legacy Inn & Suites, the first hotel to be built on Hopi tribal land in 50 years, was officially dedicated on April 27th, 2010. The Hopi Tribal Chairman, representatives from the Arizona Department of Commerce, Coconino County, and the Upper Village of Moenkopi Governor and Village Board members joined the Moenkopi Development Corporation Board of Directors in a Ribbon Cutting Ceremony attended by hundreds of people from the Hopi Villages and the neighboring Navajo community of Tuba City. The hotel project was the culmination of many years of planning.

HUD Award In an awards ceremony hosted by the Phoenix Field Office of the U.S. Department of Housing & Urban Development in October 2009, the Moenkopi Developers Corporation Board of Directors were recognized for their work as partners with HUD in the special category of ” Strengthening Communities”. This was one of five Most Valuable Partner Award Categories that HUD Field Office Director, Rebecca Flanagan, and her staff designated for exemplary achievement in the fiscal year that ended in Sept ’08. The Arizona office provided 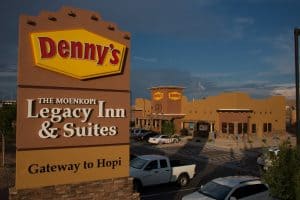 over 1.2 billion dollars in funding for projects in the past fiscal year in support of their mission to increase homeownership, support community development, and increase access to housing.

The Denny’s restaurant that adjoins the Legacy Inn was built by MDC and opened in June 2011. The combined enterprise of the hotel and restaurant provide jobs for over 120 people, primarily Hopi.